The Brooklyn Museum Libraries held an event on a recent First Saturday featuring splendid 19th century books written at the dawn of the rediscovery of ancient Egypt, spread out on the tables in the reading room. Dr. John M. Lundquist, adjunct professor of Religious Studies at Pace University, presented a primer on ancient Egyptian gods and their influence on the burial rituals of mortals, giving voice to the exhibit downstairs, To Live Forever. Digital images of illustrations on pages from the very books before us were shown on the screen in Dr. Lundquist's presentation.

Regal is another adjective that can be used to describe these books. The elephant folios are a force as objects of historical importance, magnificent beauty, and attention to studious reproduction. Their colossal size is astounding. It is no wonder a book from the Wilbour Library of Egyptology figures in the exhibit. This book is a volume from Monumenti Civili, the second of three sections that make up Ippolito Rosellini's multi-volume treatise, I Monumenti dell'Egitto e della Nubia, also known as The Monuments of Egypt and Nubia. The complete edition, published between 1832 and 1844 by Presso N. Capurro, Pisa, is comprised of nine volumes and three atlases, illustrated with color (many hand-colored) and black and white images. There are five volumes in the first section on historical monuments, Monumenti Storici, three in the second on civil monuments, and one in the third on religious monuments, Monumenti del Culto.

The historic backdrop of this work begins with a budding master and disciple relationship between Jean-François Champollion and the young Italian from Pisa, Ippolito Rosellini. The time was the mid-1820s, soon after Champollion deciphered the hieroglyphics on the Rosetta Stone. Their shared passion for ancient Egypt confirmed a solid friendship.  A Franco Tuscan expedition to Egypt was a natural progression for Champollion and Rosellini; they now had the tool of paleography to use in their analysis. This was over twenty years after Napoleon’s expedition to Egypt yielded Description de l'Égypte as one of the first publications documenting ancient Egypt from this era. Rosellini was granted support and subsidization from King Leopold II, grand duke of Tuscany, and Champollion received his backing from the King of France, Charles X. The terms established for Rosellini stated that he was allowed to join "the highly reputed Champollion to order, as the leader of a Tuscan mission, drawings to be made of Egyptian monuments as yet unknown, or not illustrated, and to excavate those which remain buried in Egypt, in such a way as to enrich the Museums of the State.”  The Egyptian Museum in Cairo hosted a recent exhibit commemorating Rosellini and this expedition. The original drawings, paintings, manuscripts and handwritten notes that were in this exhibit are from the library at the University of Pisa.

A total of fourteen members from France and Tuscany set out in July, 1828.  The party arrived in Alexandria in mid August, and after a stay there traveled to sites along the Nile through 1829. Scientists and draftsmen on the mission made many important drawings and documented their findings. The team collected hundreds of objects. One of the obelisks the team sighted, Cleopatra’s Needle, is in New York’s Central Park.

Upon return from their journey at the end of 1829, Champollion and Rosellini were determined to complete their project to publish their findings. Sadly, Champollion died in 1832 and Rosellini decided to carry out the project himself. During this time, his command of the subject was recognized and rewarded. In addition to teaching the first courses on Egyptology at the University of Pisa, he was appointed librarian. In 1843, Rosellini died before his 43rd birthday and he is remembered today as the first Egyptologist in Italy.  Eight of the nine volumes he completed were published in his lifetime. The last volume was published posthumously in 1844.

The volume in the exhibit, To Live Forever, offers a rare occasion to see at least one of the lavishly colored lithographic plates that make up the work. A spread is open to show an original plate on one page. Placed on the other page is a facsimile of a plate that is on a previous page in the book, so the public can see the different stages of burial preparations in sequential order. Images from all the books can be found in the NYPL Digital Gallery; some images are available in the Brooklyn Museum’s Open Collections as well. 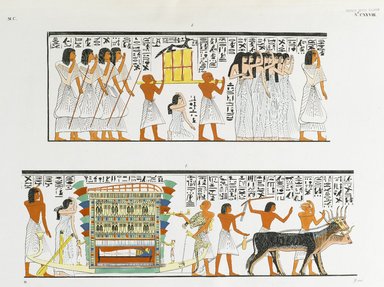 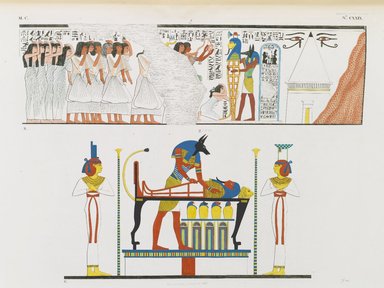 The attention to detail is evident throughout the illustrations in I Monumenti dell'Egitto e della Nubia. They invite the viewer into a fascinating culture. From Herodotus in the 5th century BCE on, historians have contributed qualitative and quantitative information about ancient Egypt; Rosellini’s work presented the information in a luxuriously illustrative way. Walt Whitman, who was captivated by the civilization of ancient Egypt, wrote about an exhibit he saw in 1853. He included this comment:

Rosellini, of Tuscany, has issued a complete civil, military, religious, and monumental account of the Egyptians, with magnificent plates. This work is of such cost that only wealthy libraries can possess it. There is a copy in the Astor Library in New York.

* Dr. Lundquist is the author of the forthcoming NYPL e-book entitled Illustrating the Afterlife: Egyptian Ideas about the After Life Illustrated from Nineteenth-Century Prints and Photographs.

Iris Finkel was an IMLS-sponsored intern in the Brooklyn Museum's Digital Collections and Services before she received her MSLIS from Pratt Institute in 2009.  Iris now works as a Digital Librarian for Knowledge in the Public Interest and a freelance archivist, and continues to volunteer at the Brooklyn Museum Library's reference desk.

Well many thanks to The Brooklyn Museum Libraries for organizing this event. I have also read The Monuments of Egypt and Nubia with is quite valuable book. It's very helpful to someone who studies the Egyptian history.